Shape Shifter have their roots in old Visual Kei and a strong visual theme of the ‘Demon World’. Let their powerful guitar riffs and magical lyrics ensnare you and see what their world has to offer~ 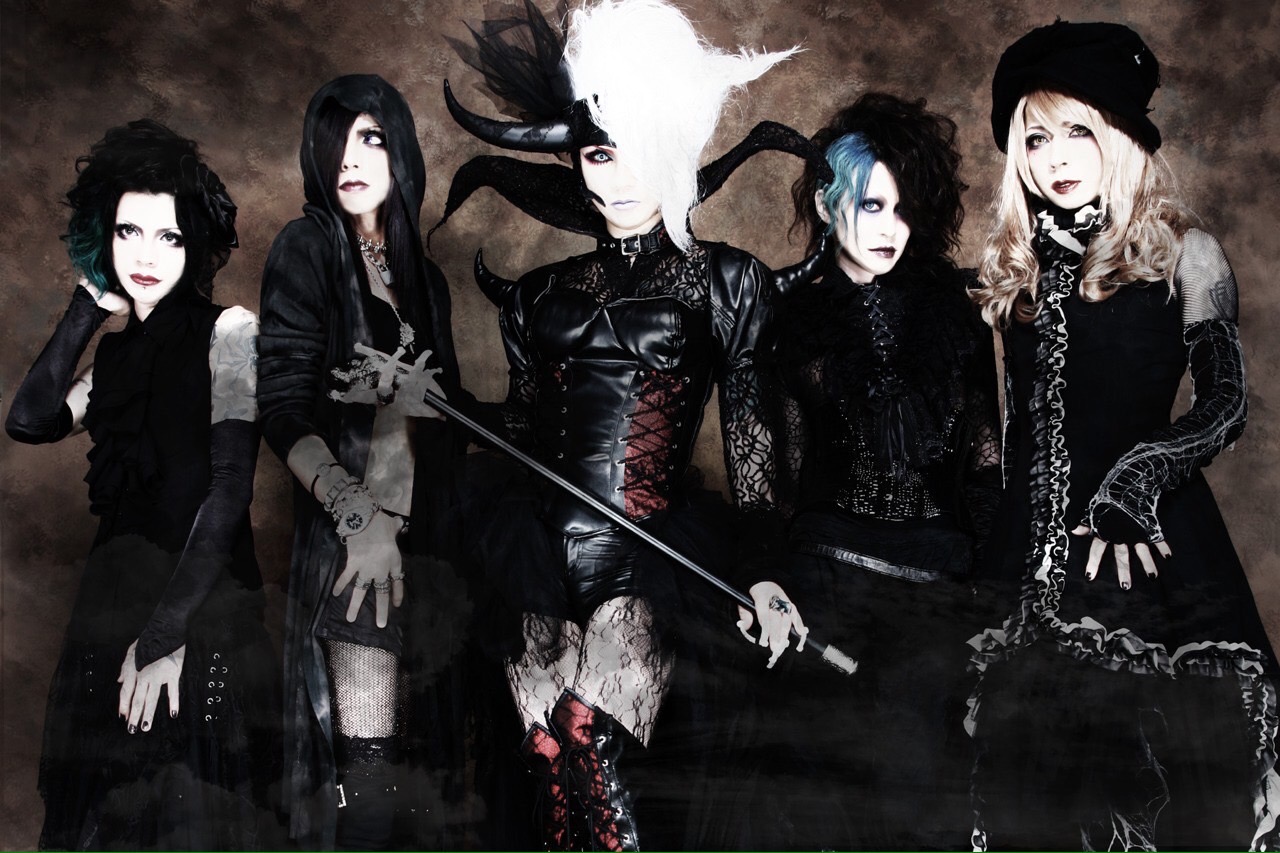 How did Shape Shifter form?

Z: Actually, Tomoka called me to make a band. We just talked a little and decided that it would be a good idea to try one together.
Tomoka: It was almost just an impulsive decision where we decided to give it a try. We all knew each other from before Shapeshifter, so the idea just built from there. We just wanted to perform, pure and simple. We all think very similarly and we have the same view on the world, so that’s how everyone kind of gathered in the very first place.
Takuya: I was Z’s drinking buddy. –laughs- He kinda invited me one day.
Z: I spirited you away, you mean! –laughs-
Takuya: I guess you really did!

What is Shape Shifter’s concept?
Z: The demon world. It’s the leader of that world, Z, and the residents coming to the surface in the human world.

What is the origin of Shape Shifter’s name?
Takuya: It’s a Yokai.  (NB: Japanese word meaning ‘Japanese folklore monster’)
Z: How Japanese! –laughs- It’s a monster.
Takuya: It’s a monster that eats humans and then assumes their form. So, in that way, the demon becomes a human. That’s the kind of concept we were heading for.

Where do you get your inspiration from for your songs?
Takuya: I compose a lot of the songs, so for me, inspiration comes at any time really. When I’m walking, when I decide to sleep, when I’m sitting. Inspiration just comes to me all of a sudden. Everything is within my head, so there’s no set time or place for that inspiration to come. It often comes when I’m sleeping though.
Jin: From taking a bath!
Z: I write all the lyrics and most of the time they come from my personal experiences. I’ve had a lot of different experiences in my life, and that’s what I tend to write about because they’re personal to me. Usually the lyrics themselves depend on the melody the band members produce for me. The song already possesses a melody and I just affix words to it.

You have your first release ‘Raimei’ going into second press,  and shortly you we be releasing a second single, ‘Kanjoame’ on 24th February 2016. Could you tell us a little about the concept and ideas behind them?
Z: ‘Raimei’ is the title of the CD, not one of the songs. We wanted to take people’s innermost hearts, and give them power. It’s not a song name used as a title because we wanted it to be unique to create our band image and for greater impact. ‘Kanjoame’ is actually one of the song names from the 3-song single.
Tomoka: ‘Kanjoame’ has a very nostalgic feeling to it, asking for forgiveness. Even so, we kept it to a very pop atmosphere to offset the meaning. We made this whole song as a team, together, so it is the essence of Shape Shifter.
Takuya: The coupling song is a big variation to the other songs, called ‘Kawaki no Tobira’. We made it as a live song to get people moving during the concerts, so I really recommend it.
Tomoka: When we made it, we weren’t really thinking about making a song that would raise the roof at a concert, but it just kinda turned out that way. It was very different from our aim, which is to say that we didn’t really have an aim at all but it turned out really different from what I really expected. To be fair, we rarely have an aim. When we make songs it’s all about working together as a team and just seeing what happens. The image we had when we made this song was to get everyone clapping, and to see the whole live house do it.
Takuya: Yeah, for the coupling song we just wanted everyone moving.
Tomoka: We haven’t performed ‘Kanjoame’ as of yet, so we waiting to see how that will turn out in the flesh.
Takuya: On stage, the songs from ‘Raimei’ are our main songs we perform right now.

What song resounds the most with you within Shape Shifter’s current repertoire?
Takuya: The song that resounds the most with me is ‘Yami Saku Hane’ since ‘Raimei’ was the symbol of me fully becoming part of this band. It was the first song I made as part of Shape Shifter
Tomoka: For me it’s ‘Kanjoame’, because it’s just a great song.
Jin: ‘Raimei’’s ‘Doukei’. This was the first song I made with Shape Shifter, so it’s important to me.
Majyuri: It’s also ‘Doukei’ for me. I love performing it live, especially the high point of the song because of how meaningful it is. When you hear it with the lyrics, I can’t help but get emotional and I become consumed by them. It’s the whole package –  music as a tool to convey emotion.
Z: I can’t decide between the songs. Since all the lyrics are written from all of my experiences up until now, I can’t choose just one because they all have very different and special meanings to me. I love them all.

Let’s talk a little about yourselves. What have you become interested in recently?
Z: Cooking! I no longer have a TV in my house, so I’ve become terribly free and found myself at a loose end. When I realized that I thought that I wanted to try cooking. Now I’ll spend 1, maybe 2 hours cooking a whole variation of things. There’s one thing that I like to try that I don’t think is used overseas so it might be quite difficult to explain… but, it’s the method of cooking beef sinews where you make it soft enough to eat. You can’t use the meat if it’s not soft, so it obviously takes a pretty long time to get it to an edible stage. That time that you give it comes from the heart, it’s something you have to put effort into. Your head empties of quite a lot of all the things that are bothering you, and it’s a really good method of stress relief! –laughs-
Majyuri: My hobby is currently travelling on Google Maps. I’ll bring up Google Maps on a really big TV, and just go for a wander. I like looking at the streets and cities in Street View so you can see what they’re actually like all around the world.
Takuya: Not drinking. –laughs- That’s all.
Tomoka: My new diet!
Z: What?
Tomoka: My new diet! Bio! I’m dieting to look after my health!
Jin: Training. I go jogging a lot to get fitter.

What does ‘music’ mean to you?
Jin: It’s my life.
Majyuri: Music is my way of life. It is everything.
Takuya: I live and breathe music.
Tomoka: Music links us with people we don’t know, it’s something that brings everyone together. Even if language is different, and you can’t convey your meaning, music will always do that for you.
Z: Music is my life and everything that I am.

Where do you want to travel abroad?
Takuya: Los Angeles because I love the metal music there.
Tomoka: Germany!!
Majyuri: St Petersburg in Russia because the town is really stunning.
Jin: I want to do a whole music tour around Europe.
Z: I’ve previously done a whole month tour in Europe and I would really like to go again. I really like the buildings, especially the fact that there are really old buildings that have become apartments. The frontage of the buildings are really wonderful. Also I love that fact that live houses look like theatres! There so much history in Europe. I love those kinds of places and want to go again.

Do you have a message for all your foreign fans?
Jin: We will come to you. We will see you again.
Majyuri: I really want you to see what we have to offer from Japan. We’d love to see you!
Takuya: To come and see you on tour, we’re going to try and become big really quickly!
Tomoka: To come close to you, we will try really hard! Please think kindly of us!
Z: We live in a really modern society these days. We all have internet and use computers and in that technological society, there are a lot more opportunities for Shapeshifter’s music to be heard or seen. The old music is fairly similar to now, and we have so much to offer in the way of music and live performance. If you could feel that even a little, and wait for us, we would be really happy. We want to make something where you can live, give you somewhere you belong. So, please, support us if you can.

Finally, what are some of Shape Shifter’s plans for the future?
Z: We have our two releases, ‘Raimei’ and ‘Kanjoame’. Also we have a 2-man tour with Synk;Yet. We’ve known each other a long time so we finally decided to do a tour together. They’re a cool band and I’m sure it’s going to become a fantastic event.
We also have a sponsored event at Ikebukuro EDGE , so we’d be glad if you could join us!