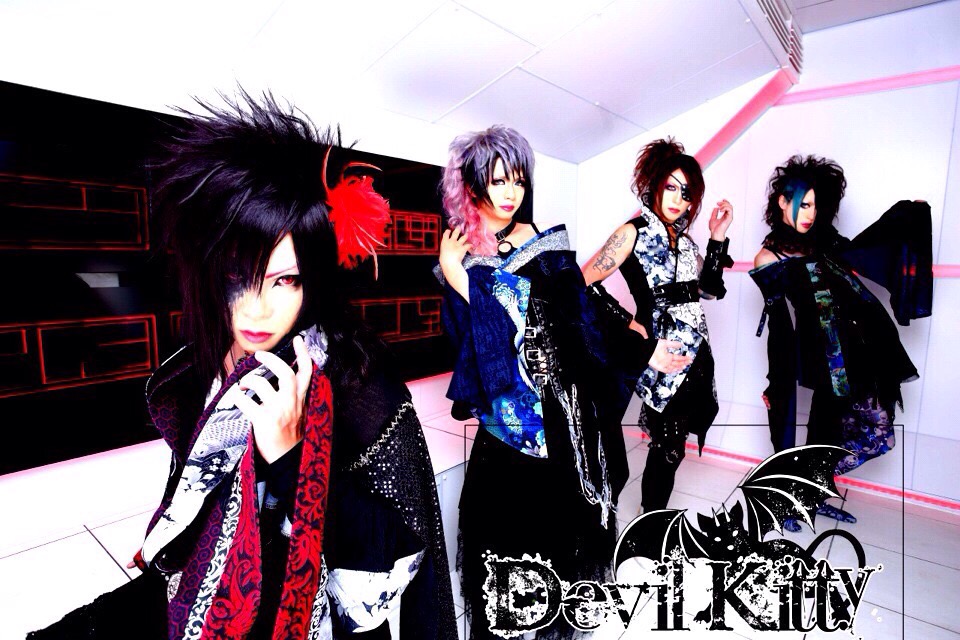 How did you come to join Devil Kitty? Why Visual Kei?

Yuuga: Devil Kitty just sort of… happened. We were hit by inspiration and, bam. Devil Kitty. It just turned out that way.
Ruchi: Yeah, we just sort of drifted together and formed a band.
Kazuto: As for VK, my friend was into VK and did bands. So I decided one day to go and see a live, and thought that I wanted to give being in a band a go. At first I wasn’t really into VK at all.
Majyu: I really love X Japan. When I saw their videos, I really wanted to give VK a try.
Yuuga: It has to be the Gazette for me. I liked their stuff.

Where does the name ‘Devil Kitty’ come from, and what is your concept?
Yuuga: They’re one and the same really. ‘Scary but cute’. That’s pretty much the whole thinking behind Devil Kitty. Cats are cute. So we became ‘Devil Kitty’.

What are the main themes behind Devil Kitty’s songs? When you play, what motivates your performance?
Yuuga: Erotica. Dirty jokes.
Ruchi: We all put our own emotion into our performance. That’s what we try to express. It’s everything within that we are getting out. That’s how I see it. It’s just a form of expression.
Majyu: It’s about our current problems that we face and a way of overcoming them.
Ruchi: We give form to that idea. Most of the time our instinct rules the way we perform.

Who heads the making of Devil Kitty’s songs?
Yuuga: Kazuto and I are the central part of the song-making process. I find the band sound within the music and make the melody from that.
Kazuto: Our roots are metal, and I think that if you listen to us, you’ll be able to clearly see that origin.
Yuuga: I write the lyrics. Most of the time they’re kind of erotic, with some jokes in there. It’s all instinct, like Ruchi said.
Next year you will be releasing another single ‘Black Market Gang I’. What inspiration and themes were behind this single?
Ruchi: It’s about desperate efforts.
Yuuga: Mainly it’s about people that die and the power behind that. It’ll be a very violent, energetic song during lives that will get the whole venue moving. Think headbanging.
Kazuto: The sound itself once again has its roots in heavy metal. It’s slightly scary at first, I guess, but you can grow used to it as you get to know us as a band.
Ruchi: It’s a raging song. In VK it’s a genre called abare – violence. [NB: Heavy metal or rock with a lot of headbanging as its main choreography]. It’s about going mad, crazy within the livehouse. Just let it all go. It also really helps that we have the Number 1 guitarist right here to help us bring about that atmosphere!
Kazuto: -laughs-

What has been the most impressionable live so far as Devil Kitty?
Yuuga: It has to be the October oneman at Ikebukuro Edge. Since it was a oneman, we had a long time in which to play a lot of songs. It was really fun and everyone really threw themselves into it for us.
Majyu: From that live, we could really see what direction Devil Kitty was headed in. We knew what we were about to become.
Ruchi: Yeah, we really came to understand what our goal was as a band and kind of what direction we were going in.
Kazuto: When we were on tour, we also had some great moments when we were travelling in the car to different venues. The conversations we had were great.
Ruchi: Just being together and doing things as a group is really fun too!

So let’s talk a little about yourselves.
What have you become interested in recently?
Majyu: I really like visiting Roppongi. It’s a great place.
Kazuto: Games! I think it’s probably popular abroad as well, but I really like Monster Hunter. The new one came out recently so I’ve been really into that.
Yuuga: I’ve got into playing poker recently.
Ruchi: I like watching Western movies. I’ll watch nearly anything but I really like Stephen King.

What does ‘music’ mean to you?
Yuuga: Just like the kanji, ‘sound’ and ‘fun’.
Ruchi: Yeah, just having fun. I think that’s what everyone here believes.
Kazuto: The guitar teaches me a lot. Also, when I produce sound as a artist, people can see what I am playing and hear it, and just have fun. That’s all I want to give. Also, that’s why music is written using the characters for ‘sound’ and ‘fun’ in Japanese. I want to continue to uphold that.
Ruchi: It’s my own self. It’s proof of my existence, my validation.
Majyu: Music teaches me the things that I don’t know.
Where would you like to go abroad?
Kazuto: I want to go to Paris to see the Eiffel Tower.
Yuuga: I want to go to Greece to see all the buildings and temples. Don’t you think they’re cool?
Ruchi: I want to go to see Times Square in America. I think that if I can see that even once, that my whole world view will be changed for the better.
Majyu: I want to go back to London because I forgot to go and see Big Ben when I went last time…

Have you got a message for all your foreign fans?
Kazuto: Thankyou for the future you’ve given us.
Majyu: I know it’s difficult for you to see us live, but I would be really happy if you could come and see our performance!
Ruchi: In this world, people have lots of different hobbies, but for the people reading this, music is the one thing that ties us all together, no matter where we are. Please listen to us and support us!
Yuuga: Visual Kei is like Japan’s bonus gift to the world. Please continue to think kindly of Japan and listen to our music!

What plans do you have for the future?
Yuuga: We’re thinking of more and more things to try and become bigger and better!
Ruchi: We really want to go abroad to do a live show.
Majyu: Definitely! Please contact us if you’re interested in us coming abroad! Don’t hesitate to call us to your country!